Showing posts from November, 2017
Show all

Dusty gets some fresh air 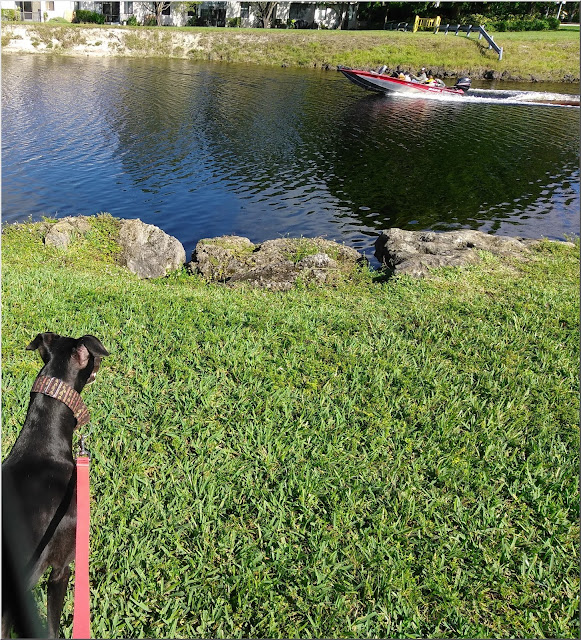 It was a wondrously beautiful South Florida November day, the kind of day that puts Dusty in a mood to frolic.

So frolic she did.
We started the day with a mid-morning walk along the Cypress Park Greenway at Tamarac Veterans Park. We didn't stay too long, as the bright sun in the cloudless sky got a little intense. But we were there long enough for a barking, jumping Dusty to chase off a couple of iguanas sunning on a rock bed alongside Stranahan River. She loves doing that. Later in the day, Dusty and I drove to Sunrise to help Michelle with her 5 p.m turnouts and feeding. Having had a few hours to rest up from her morning adventure, Dusty was primed for some hound play with Mitzi, Yahtzee, Chumlee and Joy in the Friends of Greyhounds yard, where they sometimes encounter a couple of playmates on the other side of the fence. Watch:

We left FoG to drive over to Plantation for another visit with Joy's hounds. It was a great cap to the day for Dusty. She loves hanging out in Joy…
Post a Comment
Read more 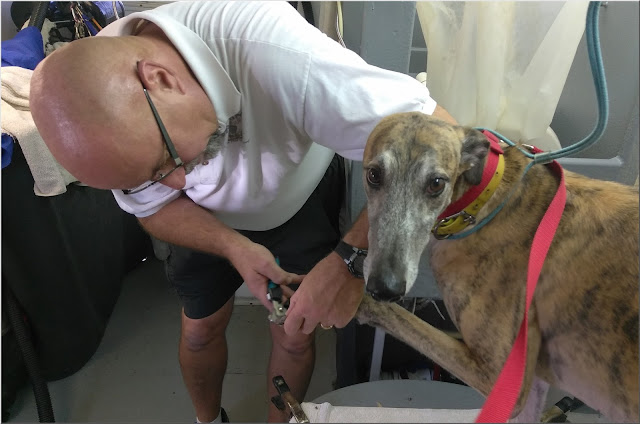 Old friend Mike brought the Groom Waggin mobile doggie spa to Sunrise today to give Friends of Greyhounds' 10 guest and resident hounds a little freshening up.

All of them were getting a bit long in the toenails, and Mike, as always, stopped by the shelter to give pawdicures for all.

Mike's a longtime supporter -- in fact, he and his wife have a couple of greyhounds adopted from FoG. He picked up his two dogs' kennel collars from Michelle while he was there.

Groom Waggin has been giving pawdicures to FoG dogs off and on for a few years. Mike's visits have been sporadic, though, and always overdue by the time he arrives. Today, he told Michelle he would start putting her on his calendar and schedule regular visits.

The Davie-based Groom Waggin takes its mobile spa all over South Florida. Mike pulls his trailer right up into your driveway and gives full-service spa treatments to dogs of all sizes -- shampoos, pawdicures, grooming, the whole 9 yards. Mike tells you all a…
Post a Comment
Location: 2621 NW 105th Ln, Sunrise, FL 33322, USA
Read more 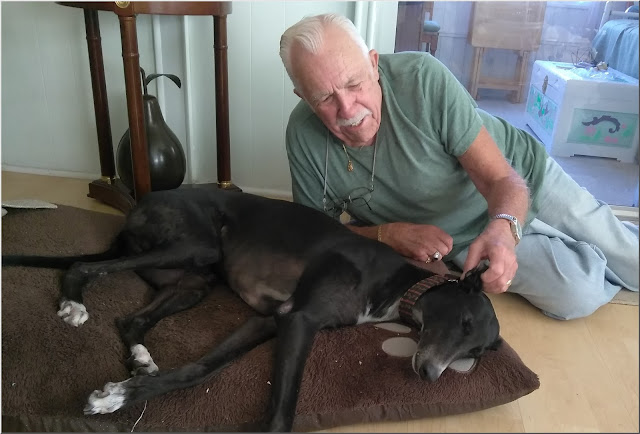 Dusty and I just got back from a short visit to Tampa Bay. Ma and Pa Sharp enjoyed every minute of their 22-hour visit with their favorite great-greyhound.

I loaded Dusty into the Kia Koach on Thursday morning for the 200-mile-or-so drive to Largo to help Pa set up his new Roku TV and introduce Ma and Pa to their new electronic roommate named Alexa. All technology tasks went smoothly. And as always, Dusty reveled in being the center of the grandparents' attention.

Dusty got a couple of quick walks around the Sharps' neighborhood. The highlight for her was a walk with Gramps and me Thursday afternoon at Largo Central Park, where holiday displays are already under installation. Here's a video of Gramps with Dusty's leash:


As always when we are in Largo, Dusty got a visit from Jane, a neighbor of the Sharps who loves to stop in for a quick hello.

It was a short visit, but a good time was had by all. We'll see the Sharps again when we drive to Largo during Christmas …
Post a Comment
Location: Largo, FL, USA
Read more 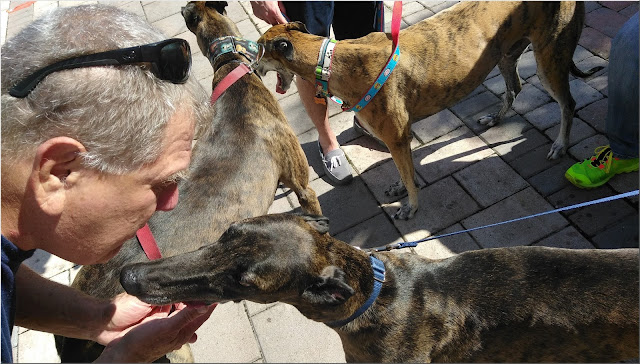 It was a glorious day for a gathering of greys. Midday temperatures got into the 80s and the sun was bright for much of the day. But One Last BBQ provided plenty of shade, and the tropical breezes made for a beautiful afternoon.

Friends of Greyhounds had a great turnout for its gathering today at the barbecue stand at Flamingo Road Nursery. The big attraction: Boxes and boxes of kennel collars Michelle and Jerry D. have collected over the years. FoG put out the word earlier in the week that adopters wishing to claim those mementos of their hounds' histories could pick them up at the BBQ gathering.

And a lot of old friends showed up to do just that. The collars giveaway is looking like a hit. Michelle distributed dozens of them today and has heard from several other adopters who weren't able to be there.

Checking in with some friends 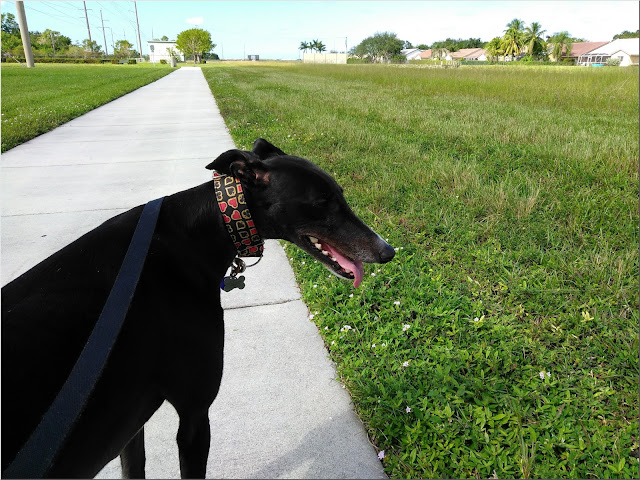 Dusty and I are enjoying a relaxing day at home today, taking the occasional long walk around the neighborhood between her greyhound naps and my Abbott and Costello movies on the Roku.

We had a fairly busy week. We spent several hours in Sunrise helping with Friends of Greyhounds business and were able to get to the two Tamarac parks a couple or three times.

Dusty also got over to Joy's new house in western Broward a few times to run with David, Honey and Turtle while their mom was away with long shifts at the hospital. I got this short video of the four of them:


There's another video of those guys along with all of Dusty's videos at my YouTube page.

LET'S HAVE SOME BBQ: Michelle at Friends of Greyhounds has organized another outing for us hound lovers at One Last Cast BBQ. We're set for this Saturday, Nov. 11, on the grounds of Flamingo Road Nursery in Davie. The party will start around 11:30 a.m. and go until sometime mid-afternoon. Come on out. These things are …
Post a Comment
Read more

Andy, whose racing name was Just Fast, is recovering at Coral Springs Animal Hospital after suffering a heat stroke Saturday morning. He was in bad shape for most of the day and into the evening Saturday. Mike reported on Facebook Saturday afternoon that Andy only had about a 50 percent chance. But Sunday morning, Mike posted that Andy is heading in the right direction.

Mike took the boy out for some lure coursing Saturday morning -- an organized run with other dogs involving a mechanical lure like is used at the dog tracks. Andy completed one run, and Mike let him rest for about an hour. But Andy went down shortly into his second run, and Mike rushed him to Dr. Willie at VCA Animal Hospital in Lauderhill. Dr. Willie sent Andy to Coral Springs a short time later.

Andy probably will be in the hospital for at least another day or two for treatment and monitored rec…
1 comment
Location: 2160 N University Dr, Coral Springs, FL 33071, USA
Read more
More posts