Showing posts from February, 2019
Show all

Uncle Jerry and Michelle help load Dusty and Speedy into the Kia Koach. It was a little emotional, as Speedy's might be the last of more than 2,400 adoptions out of Friends of Greyhounds. Retirement beckons. ---------- Speedy has landed. For the first time in his 8.5 years of life, the former Macau racer has a family he can call his own. Dusty and I welcomed him into our Northwest Lauderhill townhouse around 5 p.m. Wednesday. We drove over to Friends of Greyhounds HQ mid-afternoon and made the adoption official. We came home, unloaded from the Kia Koach, and immediately -- before even going into the townhouse -- went on a short walk up the block to visit our friend Inge, who always welcomes Dusty to her door with a handful of treats. Inge didn't disappoint -- but Dusty got most of the treats. Speedy got one or two but was entirely too distracted by all the new sights and sounds and smells to spend much time snacking. Speedy wasn't the only Macau alum that left F
Post a Comment
Location: Lauderhill, FL, USA
Read more

We have a Speedy plan 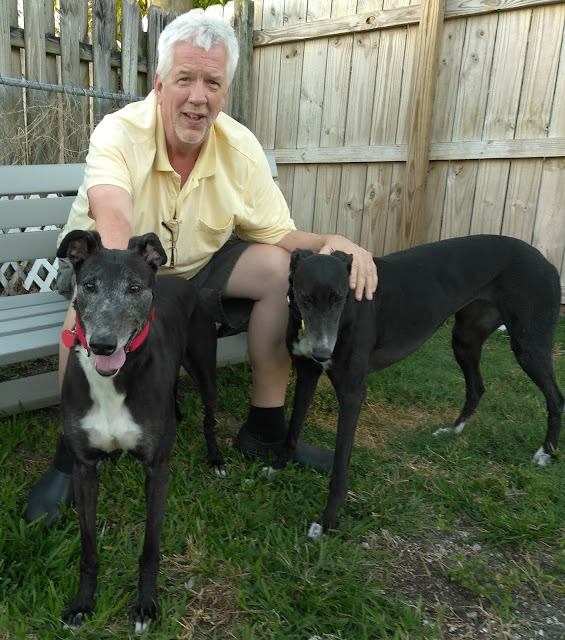 Speedy, Dusty and I pose for a quick family portrait, shot by Uncle Jerry at FoG. ---------- Just a quick note to let everyone know that we now have a homecoming plan for Speedy. He'll join our household Wednesday of this week, the day after our new furniture arrives from Rooms To Go. We decided it would be best to get the new living room in place before he got here rather than introducing him to a new environment and then changing it on him a couple of days later. Speedy's departure from Friends of Greyhounds will leave the garage kennels empty. Victory King went home Saturday with old friend Jerry B., who gave King a new name, Vic. Vic is the fourth greyhounds in Jerry's home in Northwest Lauderhill, just a couple of blocks from Chez Dusty. I'll try to get with Jerry in the next couple of days to get a family photo and some more details of his new arrangement. Of course, I'll check back in later this week with some new photos of Speedy. CHARLIE
Post a Comment
Read more

Lily shot this photo of Dusty, Speedy and Luna. ---------- Speedy officially has been initiated. The 8-year-old Macau import hasn't yet moved into his permanent home with Dusty and me. But he got a taste this morning of what his new life is going to be. Dawn and her girls drove up this morning to meet us for a leash-walk outing at Plantation Heritage Park and got a chance to see Speedy take in all kinds of new sights and sounds and smells. Lily and Rosie chilling with the hounds in a shelter area at the park ---------- Speedy's having quite an awakening. Dusty and I got him out three times last week for a stroll around the block in Friends of Greyhounds' neighborhood in Sunrise. He remained in constant attention, total focus, during those walks. Dusty and I got quite a workout trying to contain him -- he pulled on that leash with everything he had to get to the next place as soon as he could. He wheezed and coughed practically the entire time -- the the ma
2 comments
Location: Plantation Heritage Park, 1100 S Fig Tree Ln, Plantation, FL 33317, USA
Read more
More posts