Showing posts from October, 2018
Show all

A walk in the park -- as well as a swim, a couple of runs and some campaigning 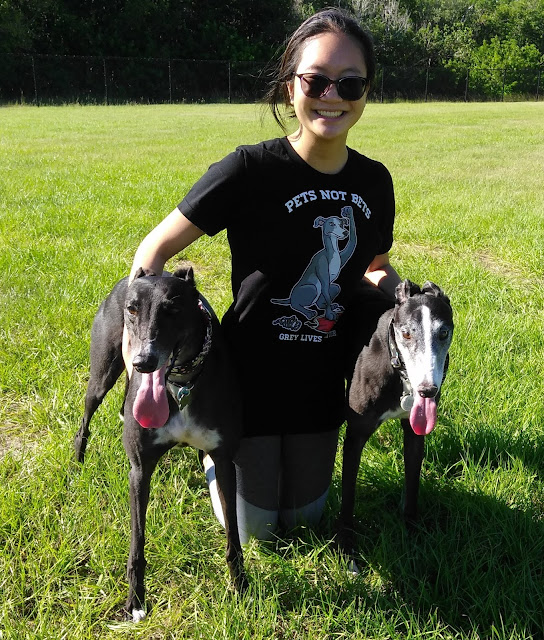 We enjoyed our first taste of gorgeous Florida non-summer today, and Dusty took advantage. She and I drove to Coral Gables this morning to hook up with Dawn and her girls for a romp at Chapman Field Park.

Dusty had a blast. Dawn, Lily and Rosie led Dusty, Luna and I to the off-leash dog park, and found one of the two enclosures unused. The two hounds took advantage of the open space and took off for three or four runs together. It was a beautiful sight watching those two running free.

But that wasn't the highlight for Dusty. On the walk back to the cars, Lily grabbed Luna and Dusty and took them for a wade in the nearby river. Luna owned that little cove. She's been there before, and she loves it. She went for a dip in the cool water with no hesitation. But it was a first for Dusty. She's never been in a body of water, so she was a little hesitant. She dipped her toes in and checked it out, but I'm not too sure if she enjoyed it or not. See for yourself: 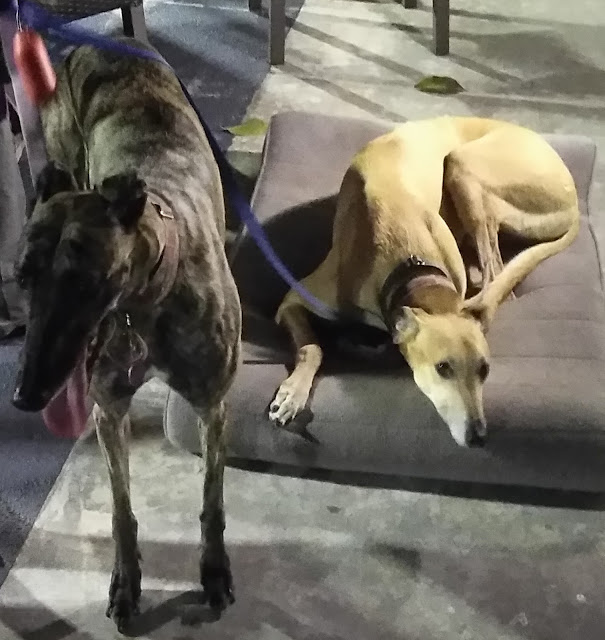 Dusty and I joined several regulars and a couple of new faces and hounds Saturday night for the first Friends of Greyhounds gathering of the new season. Michelle got us a new spot, the Panera Bread patio at the Plantation Promenade shopping center.

It was the culmination of an eventful few days for Dusty. Except for a couple of short bathroom breaks, she has been curled up nearly unconscious for about 14 hours now after a few days of visits from grandparents Ma and Pa Sharp, a distressing rescue of a family of ducklings Saturday morning and her meetup with old and new friends Saturday night.
A couple of wounded warriors were among the group in Plantation. It was the first time we saw Mike since he went down several months ago with an injured back. He looked good, said he's getting around pretty well, his pal Andy and a new walking cane helping to support him.
Greek god Hermes arrived with a pronounced limp from a sprained left front. Maurice said Hermes injured himself somehow a…
Post a Comment
Location: 10001 Cleary Blvd, Plantation, FL 33324, USA
Read more
More posts